The 2-Stroke Experience: Part One - What’s a 2-Stroke?

The 2-Stroke Experience: Part One - What’s a 2-Stroke? 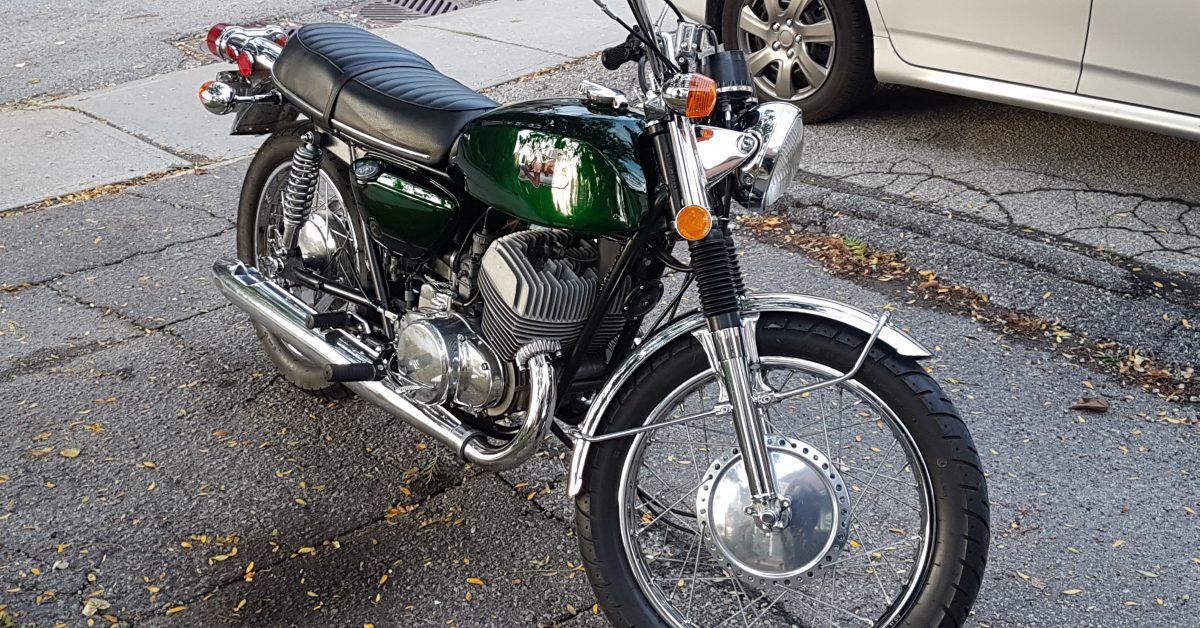 “Hey buddy, your bike is smoking a lot!”

I’ve become accustomed to this reaction when I pull up to a stop light on my 1974 Suzuki T500 motorcycle. My T500 has a 2-stroke engine—it burns oil in addition to the gasoline that most engines use—which means a lot of blue, oily smoke coming from the exhaust at idle.

Of course, the unknowing can be forgiven for drawing the smoke to my attention—it does look as if the engine is on fire at times.

What, exactly, is a 2-stroke engine? Why does it smoke so much? How does it differ from the engines most of us are familiar with? Why would anyone want to ride such a stinky, smoky, oily, noisy beast? And why don’t we see more of them on the road? In this three-part series, we will roll up our sleeves and get some grease under our fingernails to answer these questions.

What, Exactly is a 2-Stroke Engine?

To understand the difference between a 2-stroke engine and a conventional one, let’s go for a bicycle ride using just one foot:

To begin, we’ll push down on the pedal each time it is at the top; then, when the pedal reaches the bottom, we’ll wait for it to come back up before pushing down on it again. No revelation, here; we’re simply riding a bicycle using only one foot. However, in doing so, we’ve copied what a 2-Stroke engine does.

4-strokes go around an extra time to clear out the exhaust left over from burning the gas that pushed the piston down the first time around. 2-strokes do this all in the same breath–which translates into more power per cc than a four-stroke (alas, not twice as much; 150% – 170% is typical).

What's (cough) with all (cough-cough) the Smoke?

If two strokes are affectionately referred to as stink wheels, it’s because of their signature hazy blue exhaust when idling.

Why all the smoke? Pistons firing twice as much produce more heat due to the additional friction. To reduce the friction, 2-Stroke engines combine oil with the air/fuel mixture in the cylinders by mixing the oil with the gasoline in the fuel tank or by using other methods–my T500, for example, has a series of tubes that add oil directly into the cylinder from a separate oil tank on the side of the bike.

Now, if you were designing an engine in which you needed to add oil to hot cylinders, what do you think would be the easiest way to dispose of that oil after it’s done its job of keeping the pistons from getting too hot? That’s right! Shoot it out the back with the exhaust!

At idle, not all the oil gets burned up during the combustion process; and the unburnt oil mixes with the exhaust, producing blue, hazy clouds out the back (which–surprise, surprise–was a key factor in the ultimate demise of 2-Stroke street bikes).

When running at normal traffic speed or above, however, the smoke disappears because it gets burned up, along with the gas.

MyRide901 is a mobile app that captures and manages vehicle maintenance notes, images, and documentation as Service Events on a timeline that vehicle owners can share with others.

Want the App? Register now to be one of the first to get the app that makes tracking and sharing vehicle maintenance history a snap:

How Tires are Measured: 6 Things You Should Know and How to Find the Right Tire Size for Your Wheels

Tie Rod Ends - What They Are and Why You Should Care

Tie Rod Ends - What They Are…

How Tires are Measured: 6 Things You…

In this post, we have a couple of tips from a tire